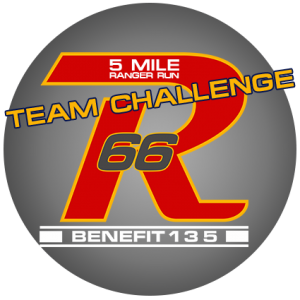 Why a Ranger Run? Well, simply stated cause it sounds hard and fun.  The Army Rangers are one of the most elite military forces in the world and what they do is hard.  To honor their hard work and commitment we’ve created a run that closely mimics their initial efforts to get into the first phase of Ranger School.  This gives us just a taste of what they endure to be called an Army Ranger and our efforts here are to keep with the spirit of Army Ranger. 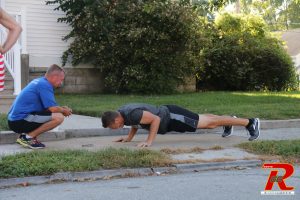 excited to bring to the Joplin running community this premier team event.  The 5M RangerRun Team Challenge is identical to the 5M RangerRun with the exception of the team aspect.  We are looking for 4 person teams to accept the challenge of competing against one another for the ultimate prize: being declared victor of one of the four states hardest runs.  We invite all law enforcement agencies, churches, businesses, schools, gyms or groups of friends to compete.

Teams can be all men, all ladies or a hybrid.  All individual scores are averaged together and the team with the highest average score wins.  Men and women are scored along the military scale that curves the exercises according to age and gender.  There are no age or gender groups for the team challenge. The 5M RangerRun Team Challenge is a separate competition than the 5M RangerRun therefor team members are not eligible for individual awards.

Wouldn’t it be cool to see gyms, first responders, law enforcement agencies, local businesses, schools, and countless other teams all competing for the title of “Champion” of the 2018 5M RangerRun Team Challenge?

Registering a team
The process of registering is very simple. Designate a team captain, a team name and select the four members of the team.  All members of the team must register individually and place the team name the team captain and the other team members in the appropriate spaces on the registration form.  This is done to help us and you know all of your team has registered before the deadline.    click here to download the registration form.  You can also register with Localraces.com or at the RunAround in Joplin.

What does the order/process look like?
In an effort to keep the competition on equal footing we will do each aspect of the RangerRun in the same order the Ranger Candidate would do them with one exception.  You will be instructed to partner up with someone of the same gender.  Each person will receive a score card in their race packet.  The score card will be handed to your chosen partner and they will count the number of push-ups done in 2 minutes and then you will switch.  You will then do the same thing for the sit-ups.  Once this is done, you will leave your cards to be picked up by our volunteers.  The chip timing will be a mat start, meaning your 5 Mile run time begins when you cross the mat and ends when you cross the finish line.  As you cross the finish you will pick up your card and head immediately over to the pull-up station where a volunteer will count the number of pull-ups you are able to do in 2 minutes.

How does the scoring work?
In the military the score for Physical Fitness Tests moves along a sliding scale based on age and the number of repetitions in each exercise performed, i.e. a male who completes 77 Sit-

ups in 2 minutes and is in the 27-31 year old age group would score 100 pts.  Our scoring will work the same way across all aspects of the RangerRun, Push-ups, Sit-ups, 5 Mile Run and Pull-ups.  Keeping this in mind we are left with the possibility of a tie by over all number.  Ties will be broken by comparing over all repetitions in each exercise.  The process is completely objective.

Continuing for 2018 are the bonus points available to a person who is able to complete more than the number required for their age/gender group to receive 100pts.  Using the same example as above, the male in the 27-31 doing 77 sit-ups in 2 minutes would receive 100 points in the sit-up portion of the race.  With the bonus points, a competitor would receive 101pts for 78 sit-ups, 102pts for 79 sit-ups, 103 pts for 80 sit-ups etc, etc, etc. This process will be carried over to each exercise except the 5 mile run.

Awards:
Awards will be given to the top 3 teams.  There are no age or gender divisions for the team competition.

Well, there is it.  Like I said before the race isn’t complicated but I am certain it’ll be hard.  I can’t wait to see you…until then.